This piece is excerpted from a longer article by Adam Hsu published in Lone Sword Against the Cold, Cold Sky. He begin by “showing Baji’s credentials” in a fascinating congruence of political animosities and defensive similarities… And in writing this he gives some insight into his own teacher, Liu Yun Chiao. 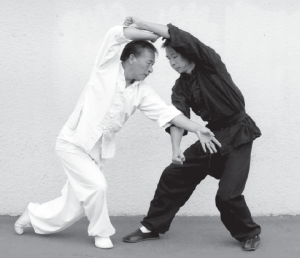 In the area of private security, Baji people also have an outstanding reputation. Practitioners fighting in Cang Zhou, baji’s hometown, recorded the glorious history of their bravery and dedication to this famous style. The person widely recognized, since the beginnings of modern history near the turn of the century to this day, as the strongest of China’s Baji masters was the legendary Li Shu Wen. He trained the military and served as a private bodyguard throughout his entire life. And three of his outstanding students trained the bodyguards for three of the most important political leaders in modern Chinese history: Hou Dian Ge followed Henry Pu Yi, the last emperor of the Qing dynasty, until the fall of Manchuria. Li Yu Hai protected Chairman Mao Ze Dong and other highest ranked government officials of the communist Chinese government. And Liu Yun Chiao, trusted by President Chiang Kai- Shek, trained his bodyguards and those of the next three presidents of the Republic of China, as well as secret service agents from several other countries such as Singapore and Vietnam.

How interesting that three classmates served the three mortal enemies who directed the course of history in 20th century China! Chiang Kai-Shek was the main successor of Dr. Sun Yat Sen’s revolution, which overthrew the Qing Dynasty, ruled by Emperor Henry Pu Yi. And Mao Ze Dong and his followers, even today rigidly committed to the communist system, drove off President Chiang Kai-Shek to the island province of Taiwan.

Understandably these three leaders lived each day surrounded by danger. Inauguration or assassination, victory or exile, life or death—unrest and constant threat was their normal lifestyle. Their bodyguards had an unenviable responsibility. Such a position could never be attained through family influence, political favor, or even referral (would any of these leaders be likely to recommend the best possible protector to a deadly enemy?) Rather, the position required demonstration of the highest level, most effective combat techniques. And out of the two hundred or so Kung Fu styles, Baji quan was the one chosen by all on the basis of merit alone.

Chiang Kai-Shek’s sons, relatives, and some of the youngest generation of high ranked government officials studied Baji under Sifu Liu Yun Chiao. In recent years Chiang Kai-Shek’s second son, Chiang Hsiao-Wu, sent his master a walking cane as a gift. It was signed by Chiang Hsiao-Wu himself, his wife and children, and inscribed with an old Chinese saying: “Even one day my teacher, forever I treat as my father.”

Henry Pu Yi also studied Baji with Hou Dian Ge, whose years of service to the “last emperor” have been written up as a novel. This even became the inspiration for a mainland Chinese TV series, developed and produced in 1987.

Sifu Liu Yun Chiao passed away on January 24, 1992, concluding the final chapter in a life of outstanding service. The early chapters of his work in the secret service during the Sino-Japanese war have long been public knowledge. They were the basis for several stage shows, including “Wild Rose,” and several movie serials entitled “Tian (heaven) Number One”, his secret agent code. Since his sad passing, the later chapters have slowly begun to unfold.