Hsu Sifu has been attempting to simplify Wushu practice for many years. At one point, he developed what is one of the most logical approaches to beginner’s foundational forms. He has taught this at his schools for years, but he’s also produced a series of children’s texts on these elementary forms.
These charming and beautiful Chinese-produced books are now available. The three-set series covers the first two of these forms, Hand Linked Boxing and Leg Linked Boxing

The Linking Fist (Volume 1)
These books are fun, well-illustrated with many drawings and—a big help to people trying to learn the form—the entire 16 movement form repeated over and over again to review as you go. A wonderful feature of the series is the ongoing dialog between bossy sister and rambunctious brother as they try to fathom Kung Fu principles. This not only gives a wonderful innocence to the book but unravels key points as each book progresses.

Linking Fist Storybook (Volume 2)
The second book in the series is more of a child’s graphic novel showing the trouble it takes at first for the kids to explain to other kids just what Kung Fu really is. Comic book style with big dialog balloons, this is meant to be read and understood by the children themselves. It has no instruction and is not necessary to learning the forms.
Special! Buy Volume 2 with any other from the series and get it for half price (discount shown in shopping cart)

Linking Legs (Volume 3)
The third book in the series is the Leg Linking Form, also a 16 move form. This one concentrates not only on kicking but on strong stance and running footwork.

The key features of these forms echoes what martial teachers have been saying for years, that many older forms repeat the same information too many times—perfect for performance, not that helpful as a teaching aid. Some don’t always concentrate on key basics. Some are just too complicated. These new “traditional” forms address all these criticisms. Each of the specially designed forms is only 16 moves, no more. The requirements of the forms progressively challenge the student while concentrating on graduated sets of skills. Once any version has been memorized it should be repeated on the opposite side. Then the two sides can be welded together.

What makes this such an important contribution is that every single action in each form is what might be called a “kernel.” Each one of them is a member of a set for powerful and significant movements. For instance, the Big Chop (PiDa) in the middle of the first road introduces a movement that contains key principles of Long Fist and can be practiced in a multitude of methods. Every movement in every form is like this.

This is the book that made Adam Hsu famous throughout the WuShu world and particularly on the mainland. We will never forget being confronted in Wen County by one of the Chen family. “You’re a student of Adam Hsu,” she stated. “Uh, yes.” “I’ve read everything he’s written,” she paused, “And it’s all true.” This book pops balloons that should be popped and shows the heartbreaking difficulty and preciousness of finding real WuShu.

Essays by one of the most educated and clearest thinking commentators on the Chinese martial arts scene. These cover a variety of subjects but always spiced with Adam Hsu’s humor, intelligence and humanity. Agree with some of the ideas or not, it is nice to listen to a thoughtful voice voicing its thoughts.

Essays by one of the most educated and clearest thinking commentators on the Chinese martial arts scene. These cover a variety of subjects but always spiced with Adam Hsu’s humor, intelligence and humanity. Agree with some of the ideas or not, it is nice to listen to a thoughtful voice voicing its thoughts.

Stars Reflecting from My Sword: A133
My Private Notes on Kung Fu

The observations of a master commentator and Kung Fu teacher. Adam Hsu’s world wide reputation is well deserved not only for the highly sophisticated approach he takes to martial training but also for his honesty and insightful prose style. Many of his articles are classics in the field. In this case he opens sections of his “private notebook” and shows you his hopes and heartbreaks—and particularly his concern— about the future of Chinese martial arts.

Stars Reflecting from My Sword Table of Contents:

Our blog review plus excerpts in English… 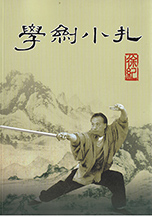 Almost a book of aphorisms, here are short but wide-ranging comments on the state of Chinese martial arts, the traditions, the practice, the weapons and much more. Somewhat in the tradition of the day book, Adam Hsu allows you to watch the range and depth of his musings on the future of Wushu and what is needed to assure it.