This  essay is excerpted from Adam Hsu’s collection of writing on subjects such as Bagua, Shaolin, Tai Chi, Weapons and more…”Lone Sword Against a Cold, Cold Sky.“ 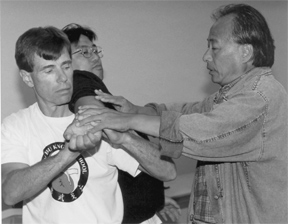 enthusiasts because it is believed the art is effective for gaining total control of the enemy. Many contend when Chin Na is applied, the enemy, though short of being injured, maimed or slain, will nonetheless surrender. However, the popular view of Chin Na is largely simplistic and in many ways misleading. This article will shed more light on the art of Chin Na, so those who undertake its methods will know how and why it works so well.

Chinese martial arts techniques are often hidden within styles such as long fist or bagua. The styles with hidden usage may provide practitioners with varying degrees of satisfaction, but like a fuzzy picture, the true meaning of the movements remains unclear. However, Chin Na is different; its usage is highly tangible. The target of each Chin Na technique is not only clearly shown, but the manner of each application—twisting, holding, grabbing and tearing—is equally as distinct. Thus, Chin Na’s easily identifiable application contributes to its allure. 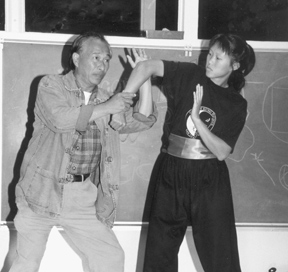 he store and picking up a “how to” book (most Chin Na books are of this type), you supposedly can learn by yourself.

It is known that learning Chin Na exclusively is less difficult than adopting a formal style. However, by skipping basic training you are a building without a foundation. You have no base. Fundamental training is necessary. Unfortunately, most Chin Na “specialists” lack a solid foundation.

Two-person training
All martial arts training requires two-person combat that ultimately leads to free sparring. Because of the “risky” nature of Chin Na techniques, those involved in two-person sets need to control their moves. The one receiving the techniques needs to give up early, before the pressure is too painful or damage has been done. And, of course, the one applying the technique must cooperate. This means the students don’t get “real” practice because both the user and the victim are cooperative and therefore faking it. Chin Na is practiced solely for its martial arts function. So one must ask: What kind of martial art do you have if it doesn’t include free sparring?

Not only is Chin Na training void of free sparring that would prepare students for self-defense encounters, but the techniques are among the most difficult to use. Kung Fu masters traditionally say punching and kicking are the easiest techniques to execute; pushing and throwing constitute the middle range of difficulty; and seize and control are the most difficult. For a seizing control to be effectively applied, the user in most cases must be at least three times better than the victim.

Learn a style
Because Chin Na techniques are so difficult to execute, it’s possible some masters may have placed special emphasis on seizing techniques. Later, some people mistakenly came to consider Chin Na a style in its own right— a totally wrong assessment.

Clearly, if we want to use Chin Na in a practical way, we can’t avoid training in a basic Kung Fu style. Although Chin Na technique appears to involve only the hands, it is actually designed for the entire body—any whole body, not just one that is well trained.

Fighting technique
To use Chin Na in a fight, the first thing you need to do is “knock on the door.” In other words, create a situation that allows you to grab your opponent, usually his arms or hands. You might attack first, and when he tries to block you start your Chin Na. Or get your energy to 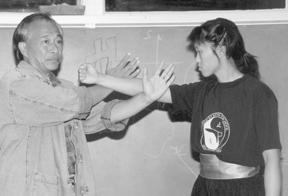 respond to some fake movement, then seize. Or show a leak in your defense to seduce an attack, then plug the hole with Chin Na.

Let’s say, for instance, you see the opportunity to seize, know how to seize and then establish contact using Chin Na technique. Still, your hands are not made of steel, and unless you’re fighting a child, your enemy may free himself and retaliate. Therefore, the Chin Na practitioner must know how to use his arms, shoulders, and also know how to correctly twist his body to get the job done. The hands are never enough.

Twisting the body is extremely important in performing Chin Na. What we’re talking about is the relationship between your body and your enemy’s for attaining the most effective angle to apply a technique. This includes switching sides to varying degrees.

Besides establishing correct angle, level changing is also an important element in Chin Na. After initial contact is made, the opponent may try moving up or down to escape. The 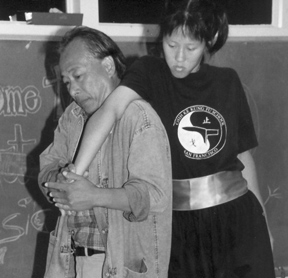 experienced Chin Na technician can change his level and take advantage of this opportunity to gain full control.

Distance also is a crucial aspect of Chin Na. Since Chin Na is close-fighting technique, people point out that getting close to the enemy is the most important factor in seizing. However, after establishing contact the Chin Na practitioner need not, in all situations, remain so close. Sometimes he should withdraw to create the proper distance between himself and his enemy to fully execute the technique.

The components of Chin Na—angle, level and distance—are all based on the critical element of steps and footwork. Though your feet will never grab like a monkey’s, they are your means of mobility. 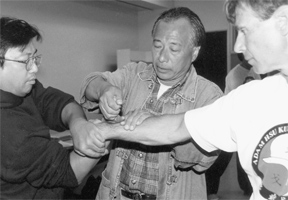 To become highly proficient in Chin Na, practitioners need an ability that transcends the purely physical. This skill is known as ting jing (listening energy). You are probably most familiar with ting jing training through Taiji push hands. It enables you to feel or anticipate the enemy’s intention. Making correct adjustments, leading or redirecting the enemy’s movement, or smothering his movement as it nears  completion are skills cultivated through ting jing training. Without ting jing, you can’t, at the instant the enemy tries to escape, feel how to correctly adjust or change techniques. He will eventually get free.

In police academies throughout the world, courses in Chin Na or some other seizing art are required. Sifu Han Ching Tan taught Chin Na at the Taiwan Province Police Academy for 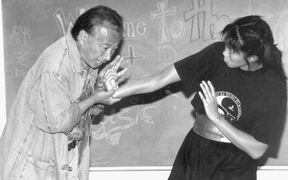 over thirty years. Some of his students followed in Sifu Han’s footsteps and gave Chin Na instruction to police, secret service men and security officers. Unfortunately, not all the students are good in Chin Na. They lack fundamental training. And so when it comes time for them to use Chin Na in the line of duty, they pay a high price by getting hurt.

An old Kung Fu saying – “The elementary Chin Na is to grab the joints, the high Chin Na is to seize the jing (energy).” Why seize the jing? Seizing the jing refers to impeding, altering or in some way disrupting the enemy’s movement or stability, thus leaving him open to attack. Once you have your opening, destroy him in any way possible—punch, kick, throw or seize. Never insist on using Chin Na at the expense of other methods that might serve you better. Deliver the technique that overwhelms the enemy and is sure to save your life.