In Kung Fu there is a kind of training that so challenges the way of thinking AND the body that people successfully ignore it for years and even decades.

Don’t take my word for why this is, let’s listen to world famous Kung Fu teacher, Morgan Freeman …

“To make a fighter you gotta strip them down to bare wood: you can’t just tell ’em to forget everything you know if you gotta make ’em forget even their bones… make ’em so tired they only listen to you, only hear your voice, only do what you say and nothing else… show ’em how to keep their balance and take it away from the other guy… how to generate momentum off their right toe and how to flex your knees when you fire a jab… how to fight backin’ up so that the other guy doesn’t want to come after you. Then you gotta show ’em all over again. Over and over and over…till they think they’re born that way.”

As Adam Hsu keeps reminding us, training for Kung Fu is not adding skills and strength onto what you already have. It is a stripping away of what you have probably decide was natural, but really isn’t. Kung Fu training starts with relaxation because otherwise nothing will change. You literally have to assume you know nothing about Kung Fu.

In this case you are thinking outside the box and you are the box. This is a lesson that can’t be repeated. 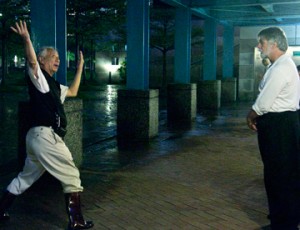 In all aspects of the world there are two basic training methods. The first is that you add to what people are already doing. Hop on the bike, start peddling, take the usual route to work, twenty minutes later hop off; essentially the same but now execised.

The other, admittedly more difficult, approach is not progressive. Instead it moves backward, retrenching your foundation, laying new floors, excavating a new basement.

Martial arts, real Martial Arts, is therefore more troublesome for older people who have to un-live a lot of their past. But it doesn’t take 29 years if you are thirty( phew!). It does take thought and the wish to experience such changes for real. 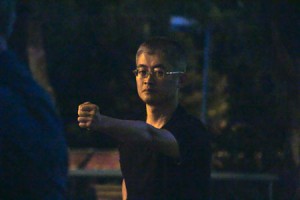 You want to erect a sky scrapper, start digging, as Sifu Hsu says. This is re-education that’s authentically Daoist in nature. It doesn’t require you to build muscle, compete with professional fighters, re-structure parts of your body. It does require you to think to relax; possibly harder practices than any mentioned above.

In some ways this is particularly saw when it comes to children. They are often taught to be the robots that in reality that will be in thirty years time. People are extremely impressed when their little treasures can perform so well; with a deep stance, good erect form and lost of near-gymnastic flash. But as good as a seven year old can move, a perfect little imitation of the instructor, you will also note that the instructors are not much better than their child students. Sadly, they are still showing off exaggerated stances, rigid posture and other decorations. But, as in a good book or performance from a great actor, there should be something there that all the world’s youth cannot duplicate, an intelligence if you will. 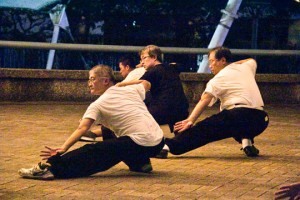 Kung Fu’s real training doesn’t reinforce what’s already been reinforced. You’ve got a dynamite right punch that you use to dominate your sparring partners. The only trouble is that it also dominates you; your plans, your skills, even you ambitions and goals.

This is the dream of a teen ager who has been bullied too much. Kung Fu wants to return you to an earlier child-state where fears had not yet been born, habits did not encase and response was not so mechanized.

All of this comes pretty directly (given its detour through me) from Adam Hsu’s fervent wish that Kung Fu returns to what it was for thousands of years, a method of re-mapping the individual and thereby re-discovering new areas.

“Sword Polisher’s Record” the original feature columns that brought Adam Hsu to world-wide recognition as one of the martial arts best writers and thinkers.