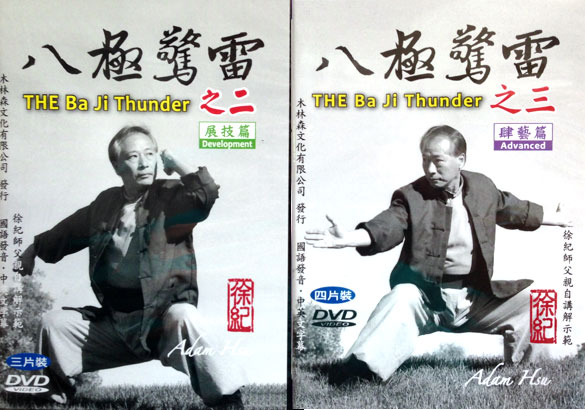 Not for the first time, Sifu Adam Hsu is doing something remarkable. And, as with many projects that fall into the ‘remarkable’ category, it is also different enough that a few words of explanation are not mis-spent. In fact, he is producing something completely new based on one of the most traditional methods for teaching martial arts.

He will soon release, through Plum, the second and third volumes in his masterful series, Baji Thunder. Volume 1, which contains 7 DVDs, was titled, simply, “Foundations.” The forthcoming Volume 2 is entitled “Development,” and the third, to follow shortly after, is called “Advanced.” Foundations centers on Xiao Baji; Volume Two’s “Development” constellates Da Baji; and the third, “Advanced,” is a 4 DVD set teaching the rare Liu Da Kai, along with Ba Da Shi.

Just issuing a series with this much depth (three DVD sets, comprised of 14 disks) is a remarkable achievement. In them, Hsu Sifu turns the whole form instruction structure on its head. In a sense he is declaring that the forms are only a small part of the system itself. “Of course,” you would say, “a system is much greater than its forms.” But, typically, we still approach our learning by form instruction first, then the other stuff later. Sifu Hsu—in this series, especially—contends this backwards.

I recently wrote a piece on forms practice in Kung Fu. In this article I expressed my opinion regarding the place of forms in training: “It is much better to assume forms are for forms’ sake, and not rely on them to be incredibly functional. They aren’t functional, that’s the way it is.” What I meant was that the particular package we call a form is not intrinsically important to learning the Kung Fu skills of the form. The form may have great aesthetic quality, but that’s just a bonus.

Baji, as Sifu Hsu demonstrates, is especially clear about this. It tends to link well-practiced movements together only after they are understood. This revives a truly traditional method of instruction. And you can see it. Baji forms just look different somehow. The reason for this is that the practitioners actually understand what they are doing. This lends a special urgency and vitality to their performance. And remember: Baji is a fierce and well-tested fighting style. According to traditional beliefs, correct Baji basics training is far more important than the form.

A quick glance at a partial list of entries from Volume Two says it all.

As in any good teacher-student relationship, you, too, will have to contribute: your own knowledge of Kung Fu, your own skills, your own understanding of how to practice (although Sifu Hsu does offer much in this area) and, of course, your own dogged determination and training.

What you will not find in Volume 2 is step-by-step instruction for how to perform Da Baji. What you will find are the individual movements and their power, timing, and applications. Having started in this classic manner, you can thread the movements separately to assemble your final version of the form. (At the finish of DVD #2 there is also a very clear demonstration of the form in normal and slow motion. By the time you reach here, picking up the sequence will give you little trouble.)

For the many of you who already have earlier videos in your library, I offer this suggestion: put them aside and pause your Baji practice, follow the instructions in the new series, then go back to your own Baji and see if it does not add breadth and depth to what you have already learned.