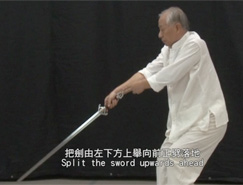 Rarely has an instructor in a field like Chinese Martial Arts (CMA) had such a wide influence. Adam Hsu, within the first year of coming to the West, was singularly honored by being voted Instructor fo the Year simultaneously in the two major martial magazines, competitors at that, Black Belt and Inside Kung Fu. This came after many honors and noteworthy endeavors. A student of Han Chin Ting, Zhao Tu Yi Tze and—most noteably— Liu Yun Chiao, Adam had gained a large understanding of Chinese martial arts and a fierce loyalty to it before early on in his career.

Among his many achievements:

Instructing in both kung fu and Chinese literature at respected institutions.

General Secretary of the National Kung Fu Federation of Taiwan.

Instructor to the Republic of Liberia.

Member of the Republic of China National Kung Fu Delegation.

Editor and publisher of Wu Tang Martial Arts Magazine, and a past

He has authored several books in Chinese, and over a hundred articles in English, Chinese, Japanese, Spanish, Italian, Russian, and German. Also, he has been featured on the covers of more than eighteen magazines throughout the world.

Honorary President of the International and Six-Harmony Praying Mantis Associations.

Devoted much time and travelled a great deal to promote a new approach to competition fencing using the principles of CMA.

Author of Sword Polisher’s Record (English), a seminal work in English on the roots and realities of traditional kung fu.

Author of Lone Sword Against a Cold Cold Sky broke new ground in pointed essays on martial and life skills.

Participated, with his students, in numerous performances and workshops both in America and abroad.

Was invited to be martial coach of Taiwan’s famed Cloud Gate Dance Theater. In this venue he worked to inject the basic principles of traditional Chinese Wushu into the bodies and psyches of the dancers. He was so successful, that he was then invited to create a children’s Wushu training program that has been implemented in many of the Cloud Gate schools throughout Taiwan.

2006: Awarded the Taiwan Government’s Cultural Award for his lifetime contributions to the traditional Chinese art of Kung Fu.

Served for three years in the same position held by his esteemed Master, Liu Yun-Chiao: Instructor for Taiwan’s presidential bodyguards.

Released a new Chinese-language book for children: Learn Long Fist. The text is partially in dialogue style, accompanied by specific instructions and many beautiful illustrations that clearly show each step of long fist basic training and the form, Linking Fist, that goes with it.

Currently resides in Taipei, Taiwan.  He continues to teach seminars and classes in the U.S. as well as Taiwan, Japan, Germany, New Zealand, and other countries.